Number Unknown. Believed to be between 900 to 1,000 Marines, though some estimates place them closer to 1,200. (Unconfirmed)

"My Emperor told me. Someday I would rise. Galley with undying foes. Sail to distant worlds. Stand up high in the field. Noble cry I cheer. Steady course for the landing. Hew many foe-men, hew many foe-men!"

The Vindicator Lords are a noble yet unforgiving Chapter of the Adeptus Astartes. As a chapter that has stood tall since the 35th Millennium, the Founding that occurred during this time however, is unknown, and no date has been found providing that information due to data being lost over the millennia that has passed. They're are also the few chapters that denied Primaris Space Marines, but were forced into accepting them. However, they managed to keep the Primaris numbers below 100, so the Chapter possesses only a small number of Primaris.

They're renown mostly come from the infamous Battle of Carimia, a Large moon fortress that was raided by the Chaos Warland only known as the Endless Hand. Their Crusade, the Crusade of the Endless Storm, brought the chapter a great deal of respect for their actions against Daemons and Heretics that we're slain by the hands of the Vindicator Lords.

Morrow: "Speak worm, the emperors justice comes soon and your words will provide a few more seconds of living your miserable worthless life."

Chaos Sorcerer of the the Endless Hand (Name Unknown): (Blood spitting out of the sorcerers with each word he speaks), "Worthless hosts of the Emperor, you shall be food for our endless hunger, the hand of chaos consumes all, the Blood God hungers! Nurgle's Rot will spread! We will take this worthless moon and devour it all, nothing will be left but corpses that worship a false god! This moon will make a great shrine for blood and rot and the daemons shall rain on your worthless worlds! The Dark Gods!" (Morrow interrupts)

Morrow: (Screams a order in rage) "FIRE! KILL THE HERETIC!"

The squadron of Space Marines pushed forward, a distress signal came from a space marine squadron that was pinned down by heavy bolter fire, Morrow and his squadrons ran to the location, finding the marines in a small hallway, three Heavy Bolters rained hell by Chaos Marine Havocs. The marines took traveled threw the working tunnels by guerrilla warfare, before entering the main sector hall of Main Factory Sector of 7, Responsible for making the MK XII Ragefire Pattern Plasma gun stock, it took them great hours to reach the Sector, fighting off endless waves of heretics. But here, was fire worse. The Chaos Marines and they're sorcerers have twisted the plasma energy to feed off of and summon waves of daemons. A Horde of Plaguebearers, Bloodletters and Blootletters of Juggernauts. A great army of Daemons, along with Heretics and Traitor Marines. Morrow made the call, calling all other available companies to come to the Sector 7, well armored and well prepared, The Great Battle of Sector 7 was about to begin. The 1st Company "Vostoria Champions" joined in the great battle that was about to rise. The rest of the Company 2nd and 3rd join they're brothers and the companies 3rd, 4th and 5th join them, at this point the Horde of Daemons and the army of heretics began to march. The Companies of the Vindicator Lords took place, heavy weapons put into position, the heavy bolters put in place. They're mission is to retake the factory and put a end of this portals and they're dark summoners. First, they must dig in and fortify the city, blocking any more invasions in. The the remainder of the Carimia Sternguard rushed in, surrounding the city and sending in shock troops and tanks to assist but much of they're forces remain defending key locations. The Hordes rushed in, the Vindicator Lords stood tall and by the order of Knight-Captain Morrow and Highlord Eygon the bolters, plasma and Predators and Whirlwind Rhinos fired, the warp magic and blades of daemons along with the heretics weapons blasting, the great battle began.

Eygon and his mighty 1st company charged in along with the Blades of Mortis, charging from the entrance areas ambushing the forces of chaos from the north, disbursing the traitor forces. The marines in the tunnel entrance fired heavy bolters from cover provided by the Tunnel systems. Forcing the charging forces to seek cover. Then Knight-Captain Morrow strikes from the northeast and is able to fire as clear as day on Traitor forces, break them and they're moral almost as fast as it started. The marines from the tunnel charged into the great battle that was to come, Eygon leading the charge meet quickly with close combat, heavy support and bolters firing and slashing threw the fields of battle. The battle was the point of glory, the great battle raged on. Highlord Eygon meet with the Chaos Warlord Vilstag of the Endless Hand, Vilstag mocking Eygon and his so called "Worth attempt to win". Vilstag charged in with the first blow and Eygon slashing him with his Power Sword at the time. A large slash of the Power Sword went across Vilstag and then fought together in close combat for a great amount of time. The Raging battle pursued with great conflict. The Marines lead by Morrow split up, Morrow went after the Summoners at hand. The Summoners we're protected by the Elite of the Endless Hand and daemons as well. Aspiring Champions faced off the Unforgiving Morrow. Bolter's went off as they marched up the stairs of the main factory and the assault marines of the squadron jumped into the skies and charged down at the Daemon guardians and Traitor Marines of the Endless hand. The marines meet them with they're bolters and sung one of the ancient Chronicles, "My Emperor Told me" into the battle to come, Eygon and Vilstag's battle came to an end, as Eygon was able to land the killing blow on the Warlord, the forces of the Endless Hand we're broken, some rushing into battle out of rage and others to regroup. The Chaos Marines and the heretics lost the battle. Morrow entered the Halls to the Power Core inner sanctum. Eygon followed with him. Within The Great halls they meet the Dark Summoner Verbus and behind him a great portal. Verbus told Morrow and Eygon along with the Blades of Mortis that followed that they we're to late and that the moon was they/res. Out of the great portal Step out the Hybrid Prince Blutmire. A daemon of hybrid blood, blessed by Nurgles rot and Khrone's Strength, beholding a Great Axe of Runic powers.

The Remaining Endless Hand and the Heretics, along with the Hybrid Prince Blutmire battled the few marines in the halls. Morrow confronted the Daemon Prince and hold his ancient blade "The Emperors Avenger" with both his hand and charged against the daemon. Rushing in at the Daemon Princes legs and slashing at Blutmire's legs. The Prince Stamped but Morrow managed to avoid his smashing foot. Slashing and slashing against Blutmire's flesh.

The Vindicator Lords are known to only nominally adhere to the dictates of the Codex Astartes in the tactical and logistical division of their troops, with their insignia and command structure varying somewhat in structure and use. Most notably, the conventions of title and nomenclature used by the Chapter are of marked difference from the Codex as the Chapter prefers to utilise the feudal heraldic ranks that originate on their Chapter homeworld of Vastoria. These heraldic ranks are traditionally appended to the nomenclature of the Vindicator Lords' command structure. The Chapter Master of the Vindicator Lords, for instance, is known as the Highlord. The Chapter's Highlord awards these titles in recognition for acts of courage and skill-at-arms performed by individual Battle-Brothers. This has resulted in such titles as "Knight-Captain", "Armiger-Sergeant", etc. being common amongst them. Without this recognition and attainment of individual glory in this manner, advancement within the Chapter is not possible.

(Deceased) Knight-Captain Morrow Vonsoul: Knight-Captain of the Believed Second Generation of Vindicator Lords, a most renounced member being responsible for slaying the Hybrid Daemon Prince Blutmire by slaying with the Ancient Relic Blade "The Emperors Avenger" during the events of The Battles of Carimia. He lived a most honorable, his death as well honorable. During a event, he was slain in action while defending a escort ship to take the last few marines departing a doomed world.

Dreadnought Highlord (Honorable Title) Eygon: Highlord (Chapter Mater) of the believed Second Generation of Vindicator Lords, Lead the Great Battle of Sector 7 and slayed the Dark Summoner Verbus of the Endless Hand, he was given the Relic Power Axe "Carimia's Wrath" and used the Relic Bother, "Truth of Vindication" until his fall. Was well known for his ability of slaying daemons rather well. Now serves as Dreadnought with ancient armor, known now as "The Speaker" for it has been tradition for Highlord's to seek advice from Eygon when in time of need.

The Vindicator Lords predominantly wear black coloured power armour with the backpack, helmet, shoulder pauldron insets and left gauntlet being painted white. The Aquila or Imperialis on the plastron (chest guard) and the shoulder pauldron trim is gold in colour. Black symbolises the battle smoke of war, stating that the Astartes are forged in war, while white is to show purity - to show that they're untainted by any sort of corruption. The colour gold is believed to reflect any evil that may harm them.

The Chapter style itself has a large variety of expression. Some marines will wear red robes, tabards and hoods or Templar-style, artificer power armor, complete with knightly-patterned helmets (similar to the stylised helmets worn by the Grey Knights) or a mixture of both. They're armour expresses their loyalty to the Emperor and to show that they're crusaders at heart.

The Chapter also approves designs of certain helmet styles depending on rank and time served.

The Vindicator Lords' chapter badge consists of a stylised open-paged tome, with one small red coloured Maltese Cross emblazoned on one of its pages, and their Chapter's sacred Oath of Moment to the Emperor on the other. A large power sword, pointing downwards, piercing the center of the tome.

By the Vindicator Lords

"I distrust our newly founded brothers, our brothers fought the right to wear they're power armor by serving time our trails but the Primaris thou do not serve the same fate? and now the glory and honor is stolen by these "Primaris" as the Space Marines that the Emperor's creation now stand in the back of the battles? Surely thou will make great conflict and will turn brother-against-brother or Space Marine against Primaris Marine. This fate will lead to nothing but unwanted bloodshed."

About the Vindicator Lords 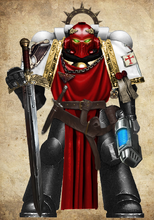 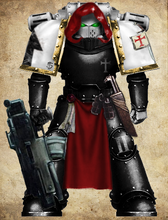 A Vindicator Lords Knight-Crusader of the 2nd Company, 5th Tactical Squad (Battleline). Note: Dawned in red hood and tabard, along with a light white Maltese cross emblazoned upon the left plastron (chest guard)..
Add a photo to this gallery
Retrieved from "https://wh40khomebrew.fandom.com/wiki/Vindicator_Lords?oldid=141790"
Community content is available under CC-BY-SA unless otherwise noted.