A depiction of Timor, the Chaos God of Nightmares and Fear.

God of Nightmares and Fear

All languages in existence

Timor is a minor Chaos God, his influence is only outmatched by the four major Chaos Gods. He is depicted as a cruel god feeding on the fears of his victims. The way he influences the masses is by using their fears and nightmares to convert them to his cult.

Since the apparition of life in the Universe, every lifeform has or had fears. Timor is a representation of these primordial fears. Every fear, every nightmare that all life had nourished Timor, only to make him stronger in the warp. Due to the ever-changing nature of fear, Timor had close ties with the Chaos God Tzeentch, the Lord of Change, only to be betrayed by him. This caused Timor to hate Tzeentch more than any other entity in the Warp.

Like many other Chaos Gods, Timor also has daemons that serve him. These daemons are called 'The Bringers of Torment'. Many of them don't have a true form, as they transform into their enemy's biggest fears. The Greater Daemons of Timor are named 'Nightmare Bringers'. Unlike the lesser Bringers of Torment, these Greater Daemons have a specific form. Any mortal who gazes upon one of these foul creatures is immediately paralysed by fear.

Luctus Miseria: Chaos Lord of the Sons of Torment Chaos Warband, Luctus is Timor's favored son, as he was the first to receive his dark blessing. Luctus is also the only one to talk directly to Timor by using the Eye of Fear, becoming a part of Timor and capable of harnessing a fraction of his power.

Worshipers of Timor are known as "Fear Seekers", all of whom suffer from horrible nightmares and visions. They are constantly haunted by their worst fears, as for them, this is the only true way to live - to fear constantly and please their god.

The Dark Forest is Timor's realm. It is a dark place where light seem to disappear. Anyone who tries to enter this realm has immense anxiety and if they stay for any length of time, they will have a panic attack leading to death.

Timor's sigil is pentagram with an eye centered upon it. It is made in a way that it is impossible to understand how it is formed, creating a sort of anxiety when gazing upon it. 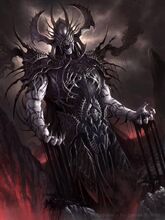 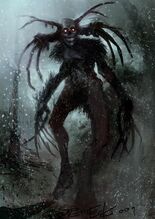 A 'Bringer of Torment' lesser daemon. 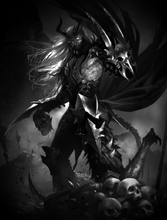 A Daemon Prince of Timor. 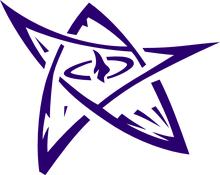 The sigil of Timor.
Add a photo to this gallery
Retrieved from "https://wh40khomebrew.fandom.com/wiki/Timor?oldid=96416"
Community content is available under CC-BY-SA unless otherwise noted.