1,000
(Some extent reports claim their numbers to be as high as 1,500 Battle-Brothers, in direct contravention of the Codex Astartes.)

"Our Father Gave Us Our Fury! Now Our Enemies Will Know Our Wrath!"

The Sanguine Berzerkers are a Loyalist Successor Chapter created from the lineage of Sanguinius and his noble Blood Angels. An ancient and laudable Chapter, the Sanguine Berzekers claim to be one of several Chapter created during the Second Founding in 021.M31, following the successful conclusion of the Great Scouring. However, due to the paucity of records, human error and the passage of time, these claims cannot be accurately verified.

Following their inception, the Sanguine Berzekers quickly established themselves as a bellicose and savage Chapter, forever prosecuting their neverending war against the enemies of Mankind. But the Sanguine Berzerkers have also garnered a reputation as one of the more savage Chapters of Blood Angels' lineage, for like their Progenitors, the Chapter has a penchant for close-quarters combat and makes heavy use of assault units within their Chapter formations.

In battle, the Sanguine Berzerkers revel in releasing their uncontrolled savagery against their foes, craving the feeling of hot blood on their skin and splattering across their Armour. Though they are tireless protectors of Mankind, having garnered significant victories throughout Imperial history, their reputation is such that most Imperial commanders will only accept the Chapter's aid in the direst of circumstances.

Following the closing days of the Horus Heresy and the subsequent war of reciprocity, known as the Great Scouring, the Blood Angels Legion (like all their fellow Loyalist First Founding Legions) were split into many smaller, separate chapters. According to the historical accounts of the Sanguine Berzerkers, they were initially formed from a company of the Blood Angels that had bore a more bloodthirsty mien than their fellow brethren. Their Captain was named Ymir, known by his given nickname, 'The Mighty', who led his brothers to many victories throughout the Great Crusade. They were typically the first in the fight, fighting without fear thus giving them the nickname the 'Berzerkers'. The Berzerkers pulled victory out of the jaws of defeat for the Blood Angels on many occasions though they often sustained very high casualty rates.

After the Heresy and the splitting of the Legions, Ymir took his newly formed Chapter and went out in search for a home. After a decade of searching, the Sanguine Berzerkers found the world of Drengrheim in the Ultima Segmentum. Drengrheim was a feudal world reminiscent of Terra's Dark Ages. The society of the world was similar to that of the ancient Scandians from Terra and quickly bowed to the Astartes as they landed on the planet. They claimed Drengrheim as their new Chapter Homeworld and built their mighty fortress-monastery, the Bloody Fortress.

The Sanguine Berzerkers have always sent battle companies to help with any major Imperial Crusade. Most notably sending several companies to battle in the second and third war of Armageddon along with the most recent Black Crusades.

Located in the Ultima Segmentum Drengrheim is a Feudal World and is reminiscent of ancient Scandia. The planet has only 3 continents named Jotunheim, Svartalfheim, and Midgard:

The Sanguine Berzerkers are a Codex-Divergent Chapter due to their high numbers of Marines in the Chapter. They have ranks that are reminiscent of Ancient Scandian tribes, although they still have 10 battle companies and a Scout Company.

The 'Einherjar' are the Elite 1st Company and are considered the greatest warriors in the entire Chapter. They have a near legendary status in the Chapter, half are equipped with terminator war plate and the others wear regular war plate. For a Marine to earn this status he must serve for at least 2 centuries or have fought and distinguished himself with a heroic stand against and enemy that outnumbered him.

The Chapter claims descent from the Primarch Sanguinius and the Blood Angels Legion. This claim is backed up by the Marines of the chapter who possess the same savagery in battle as their genetic forebears, and typically, are known to drink the blood of their enemies.

Throughout the history of the Chapter, they have done their required duty and handed over a portion of their gene-seed to the Adeptus Mechanicus to check for purity. Unbeknownst to the Chapter, the Blood Angels' Lord Commanders have always stepped in to take the sample, then hand over what is to be believed to be the same sample. Sometime in M41, the Mechanicus somehow got a hold of a an actual genetic sample, the Chapter has a 25% chance of deficiency which is impossible for Blood Angels stock as it typically shows a 50% deficiency due to their twin-genetic curses of the Black Rage and Red Thirst. This caused the Mechanicus and the Inquisition to begin a search in the Chapter's History. The Inquisition was on the brink of declaring the chapter Renegade, when a Lord Inquisitor stepped forward and abruptly ended the investigation.

The Chapter bases is culture off of the people of their homeworld, which in of itself is based upon Terra's ancient Skandian culture. They prefer to use close-quarter combat and have an affinity for both power and chain-axes. The title Oxrekkr translates to 'axe-men' in the tongue of Drengrheim. Many mistakenly believe the Sanguine Berzerkers are descendants of the Space Wolves, being as both Chapters' cultures are very similar.

The First Generation of the Sanguine Berzerkers was extremely different from the generations that would follow. The 1st generation was extremely violent both on and off the battlefield. They suffered from immense headaches, bleeding from the nose and ears, including facial and body twitches when outside of battle. In battle they were unstoppable and fully bloodthirsty, throwing caution to the wind. The 1st Generation fully died out a full two centuries after the Horus Heresy. The last member of the 1st generation was the first Chief Librarian Lokan. Lokan and the original librarius didn't share the same traits as their brothers, and it seemed the Librarians' presence made the Brothers of the Sanguine Berzerkers uncomfortable, and thus would give the Librarians of the chapter a wide berth.

The generations that followed the First, were different being that the bleeding from the ears, nose, the headaches, and the twitching stopped. The fury of battle is still strong in the current generations and is what the chapter is usually known for.

The Chapter has many different beliefs, but only a few are known to the rest of the Imperium at large, one such belief is that they view the Emperor as a god. The Chapter has a weird belief of not wanting their eyes drawn in a picture or painting, or even seen in a pict. Therefore the Chapter will have cloth hoods as part of their wargear so that they can hide their eyes when not wearing helms.

The Sanguine Berzerkers primarily wear crimson coloured power armour with storm grey colour on their shoulder pauldron trim, coutres (elbow guards) and poleyns (knee guards). The colour crimson represents the Chapter's lineage as Scions of Sanguinius their laudable history and inherent fury, while the storm grey represents their unbreakable will.

The Sanguine Berzerkers' Chapter icon is believed to be a long ancient symbol for berzerkers, while the two blood drops represent th

eir Founding and also their lineage as Scions of the Great Angel.

By the Sanguine Berzerkers

"THE BLOOD OF THE PRIMARCH CREATES OUR FURY!"

About the Sanguine Berzerkers

"They are Fury made manifest! They will do all in the name of Sanguinius! I have never seen such power...I would hate to face them in battle!" 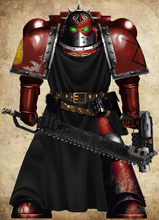 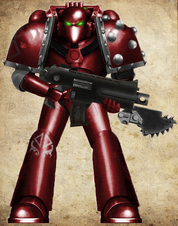 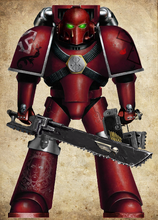 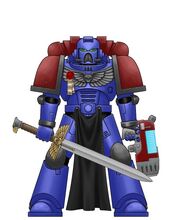 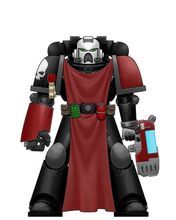 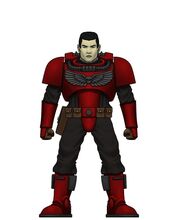 Retrieved from "https://wh40khomebrew.fandom.com/wiki/Sanguine_Berzerkers?oldid=119876"
Community content is available under CC-BY-SA unless otherwise noted.