Jueelya as a Daemon Prince

Jueelya Daraich is a Daemon Prince(ss) of Slaanesh and a close ally of the Artists of Agony Chaos Warband.

Jueelya was born on Dragoste at an unknown time. At some point in her youth she joined a growing Chaos Cult and began to work her way up through the ranks, so that by the time she became an adult she had already replaced the former leader and set herself up as Demagogue. With unprecedented speed, her cult managed to infiltrate and take control of Havilah, the capital city. Jueelya placed herself in the inner circle of the world's rulers, and one by one converted them to her cause. The cult spread across the other cities and within a few years the entire planet fell under Jueelya's control.

The Artists of Agony

The events that led to her ascension to Daemon Prince began with the arrival of Iccabod Dael and his warband, the Artists of Agony. Still reeling from their defeat at the hands of the Imperium and following the whispers of Chaos, the Marines sought refuge on Dragoste. Extremely pleased and exceedingly willing, Jueelya invited the Artists to dwell on her world for as long as they wished.

Disturbingly and eerily cheery at almost all times, Jueelya projects a sense of affability to both friend and foe. Even when angered she still acts cheerily and focuses on the pleasure she receives from causing pain and destruction.

Jueelya is something of a kleptomaniac and has a love for music. 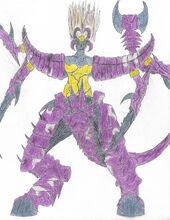 Jueelya as drawn by the author 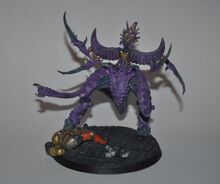 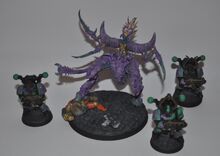 With some of the Artists of Agony

Retrieved from "https://wh40khomebrew.fandom.com/wiki/Jueelya_Daraich?oldid=124404"
Community content is available under CC-BY-SA unless otherwise noted.