A Winged Lion wielding an axe
A Tactical Marine of the 2nd Tactical Squad (Battleline), 3rd Company
(As indicated by the colour of the shoulder pauldron trim, in accordance to the dictates of the Codex Astartes.)

"Our honor is in spilt blood"

"I am an Incursor, my honour begins and ends with spilt blood whether it be my enemies or my own. Then the flames shall engulf either one of us."

— From the Incursors' Rites of Battle

The Incursors are a Loyalist, Codex-compliant Space Marine Chapter of unknown origins created during the 23rd 'Sentinel' Founding. This fleet-based Chapter is an isolated and often reclusive Chapter that rarely works alongside other Imperial military forces or fellow Adeptus Astartes Chapters, and are often accused of being accused of being haughty or lacking in brotherhood. This is mainly due to their neverending Crusade to bring to light of the Emperor to the darkest corner of the galaxy, and despite their isolationist tendencies, this Chapter has continuously defended the realm of the Emperor of Mankind, earning a proud and enviable record of valour and service, comparable to other more senior Chapters.

The Chapter has had a very prideful history as each compliance, battle, discovery, or negotiation is recorded and placed in their fortress monastery Great Libraries. When the deed is recorded the chapter serfs then make banners of it and place it in the mouth of a lion statue somewhere in the vessel or in the Honored Halls. The chapter has nearly isolated itself from the rest of the Imperium ever since the loss of their homeworld but have not neglected their sacred duty of protecting the worlds of the Imperium and its people. Because of their isolation the chapter has very few pieces of modern MK VII armour with many wearing MK IV or MK V armour suits.

Before the Siege of Andrene the chapter was Codex Astartes-compliant. But after the loss of their home-world the astartes have been ever slowly drifting away from the tenants of the Codex Astartes.

Within the chapter squad ranks are determined not by age or experiences like other chapters, but by fighting for said rank in a honor duels overseen by another squad sergeant. When a battle brother commits a unforgivable act one of two things will happen, the first one is the battle brother is exiled or he will be taken into the Halls of the Last Rite. While in the halls he is stripped of his armour and given last rites then he is finally executed by the Chapter Master himself. Before each battle the younger members of the chapter/company are put into stasis pools which are call Sarollnah Wombs these pools are full warm liquid that makes the occupant in a state of perfect relaxation and there minds are allowed to wander the Emperor’s spiritual realm. In times before battles each squad separates itself to different chambers, then a fire is made in the middle of the room. During the ceremony a select group of human serfs designated as Fire Shamans which dance around the astartes painted their armour in ritual oils and blows a powder in the faces and face-plates of the proud warriors. Ever since the destruction of Andrene the Terminators have put themselves in stasis and are only to be awoken when the chapter needs guidance. When the Chapter needs a dreadnought to be awoken they awake three, these dreadnoughts are put in a pack of three an overwhelming attack force than will break the line of their enemies.

Every 500 years the Incursors go a world known Nara to participate in a The Great Hunt, during this hunt one company is sent out at a time, each battle brother strips down to his sash and is armed with a knife and a spear. before the brothers are sent to hunt they are placed around a great fire when the entire company is placed around the fire they cut their arm and collect the blood in a small cup. once all the cups are collected they are mixed in a large container with various powders and herbs and then thrown into the fire. The blood smoke chemicals enter the astartes, as they smell the smoke the battle brothers all perform ritualistic dances around the fire to the point of exhaustion during this dancing the astartes are said to wander in between the realm of mortals and the realm of the spirits. while this is happening chapter serfs put war paint on the unconscious astartes, once they're all awake the astartes proceed to their transports to travel to Nara. Once they arrive on Nara the battle brother separates into individual groups and hunt a great Nolem a lion like creature, These creatures are rare on the continent the go, this is on purpose as to avoid hunting the species to extinction. Nolems are the apex creature on Nara. the company has seven days to hunt this creature, out of the hundred battle brothers that are sent to hunt only an average of five will recover a pelt of a nolem if less even. At the end of this hunt the chapter celebrates on the Faltriesh. Those who succeeded in hunting and skinning a Nolem are then allowed to put it's pelt on their armour.

When the Chapter is given or takes a grand vessel worthy of a Astartes they give it a name in the Andreni tongue. Each battle brother has the skull of the target he killed when he was a neophyte put somewhere on his war-plate. Taken from their homeworld is the belief that the body must be burned to ash and the bones placed in small urns so that the spirit may rest, if the body is not burned then it is believed that the spirit wanders senselessly away from the Emperor’s light and hunts down their allies who didn’t help them get a ceremonial burial. The chapter uses two species of birds known as the Cralec and the Olwen, these two birds represent future fates, each librarian is given one of each species, as the Librarians meditate to peak onto possible paths depending on the outcome one of the birds will go mad, if the Cralec goes mad then the chapter will suffer a tragedy and if the Olwen goes mad then the chapter will make great accomplishments. When the path reveals a great tragedy, then the chapter council must make steps to either avoid the tragedy altogether or not make it even worse. Taken from their home-world aside from the astartes bodyguards their are human bodyguards as well, these guards are all female warriors that are given training that are almost beyond what the human body can take.

Every since the destruction of Andrene all records of its culture, people, and the rest of the world has been destroyed, the reasoning behind this is that the Andreni born within the chapter only have the right to known and remember the glory of Adrene and that only an echo of Andreni culture will be known future non Andreni astartes members.

The chapter use to recruit from their home world of Adrene, since the destruction Adrene the chapter has become a fleet-based chapter, recruiting from worlds they come across. One of the trials include going one of the designated hive worlds and use it for the aspirant to hunt certain people or groups of people. The chapter gives the Aspirant only the general area of the target and sends them out, the aspirant must fend for himself and craft his own weapons and armour. Once the Aspirant accomplishes his goal he must bring the head of his target back to the chapter. At the start of the second trial the aspirant must survive on a random deathworld the chapter comes across whether it be a Arctic death world or a Jungle world. It doesn’t matter to the chapter as long as the planet is dangerous it is suitable for the aspirants. After the survivors live a month of the planet the survivors are rounded up and then are escorted to fight one another to the death only until a fraction of the initial aspirants are alive. After these trials are complete then the Aspirants earn the rank of Neophyte.

The Incursors Chapter badges is a stylised winged-lion, standing rampant and wielding a mighty axe, centered upon a field of green.

For the most part the Chapter gene-seed is pure, with a few exceptions. If a battle-brother that has a darker skin tone their skin colour will slightly change to a more brownish-grey pigmentation, while someone with a more fairer skin tone will eventually become paler.

Primarch's Curse: The Shut Down

the chapter's gene-seed is strange, when it comes to the curse a random organ will in a way shut off. This shut off can last for a few minutes to years, this can range from a Battle Brother not being able to use his acidic saliva for a year to another battle brother having his secondary heart stop working for some time.

Since the Siege of Andrene most of the chapters’ relics were lost and many of what the chapter considered sacred was lost.

Incursors Apothecary of the 5th Company. 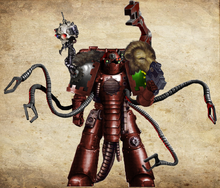 An Incursors Chapter Techmarine.
Add a photo to this gallery
Retrieved from "https://wh40khomebrew.fandom.com/wiki/Incursors?oldid=87230"
Community content is available under CC-BY-SA unless otherwise noted.