Hwarang Sul is a member of the Jade Knives Space Marine Chapter, who is currently serving the Long Vigil in the elite xenos-hunting Deathwatch, the Chamber Militant of the Inquisition's Ordo Xenos.

Hwarang would be born to a farming community in the vast peninsulas and islands of the southern hemisphere of Zhongqian, as a child, the farmland of his family would be destroyed by local wildlife, with no further choices, Hwarang's father would journey north to the core cities of the planet. knowing they had recently been opened to the south, and would be accepted as a literati underling, a low grade of chapter serf, assisting the mortal documentists and orators of the chapters in their historica records.

At this young age, Hwarang would be noticed as talented by the literati serfs, and forwarded to become a brother of the chapter, excelling in his battles against the Tau Sept of Vior'La as a scout, his aggressive tactics and headstrong nature greatly amused and impressed his sergeants and was rumoured to have drawn the attention of even his Captain, Chen Long, and would be upgraded to Primaris, with his advancement to Intercessor in the Fifth company under Zhuhou Zhang Yi.

The Fifth Company is known for its mastery of ranged firepower, possessing no squads of melee capability as dictated in the Fadian Zhu. As a result, astartes within the company are expected to train rigorously in all forms of ranged firepower. Therefore Hwarang was trained extensively as both an Intercessor and Hellblaster, excelling as a forward scout, he earned his squad the moniker of "torch bearers" as they were often first among the battle, their scoped bursts of bolter fire and plasma streams streaking across the battlefield, these bursts of fire became synonymous to the company as signalling flares, lighting up the positions of the enemy forces for his brothers to advance on.

Hwarang's squad would work closely with the company Librarian Xia Shen, often functioning as a bodyguard unit for the psyker. Shen was known to the company as "the tiger" for his aggressive nature and forceful use of his librarius discipline, fighting at the head of battles with devastating force as he summoned bolts of fire, and walls of earth to bring enemies to heel.

During a battle against the Tau auxiliary race known as the Kroot, Hwarang's squad was placed at the vanguard with Xia Shen, as had become the norm in these harassing campaigns. However a surprise deployment of battlesuits would separate them from the main force. With their retreat cut off by these super heavy battlesuits, the squad were forced to adopt a defense against kroot ambushes, the bolt weapons of the squad alongside the elemental powers of the librarian made quick work of the first waves. however the true threat was yet unknown, as stealth suits advanced upon the squad. preoccupied with the Kroot attackers who harassed and contained the small force.

Too late would the squad become aware of the stealth suits presence, only becoming aware after the force decloaked to fire upon the Librarian, who would be saved by Sergeant Jimin. blocking the burst cannons fire by way of his own body.

After the death of his Sergeant, Hwarang would act as the team's de facto leader alongside Xia Shen, cutting a swathe out of the advancing tau with aggressive disregard. Upon returning to the Company forces on the far side of the battlefield, carrying the body of his former leader. his actions in battle were commended to Captain Yi by Xia Shen. and he would be promoted to the rank of sergeant.

His position was short lived however, as he would be quickly seconded to the Deathwatch, notable for being the first of the chapters Primaris to be given the honour.

However the placement to the Deathwatch is a deep source of conflict for Hwarang. His former Captain Zhang Yi is known for his exile to the Deathwatch and he knew many brothers reprimanded for asking probing questions about such. From those in the company who knew him before his service, he was known to be an exuberant and deeply spiritual commander and the man who returned was considered a hollow, vacant shell of the man they had known. A suddenly dour and broken man.

Perhaps his movement to the Deathwatch was an honour, to be chosen for his aggressive actions against the Tau and xenos experience. Or perhaps it was a punishment by his leaders for being rash and impulsive, for failing to protect his sergeant. An exile like his captain before him.

Hwarang is known for his flamboyant and aggressive nature upon the battlefield, often the first to push forwards, with bolt rifle and combat knife in hand. When talking amongst other members of the Deathwatch he frequently jokes by exalting his martial ability and his position as first Primaris to be sworn into the deathwatch, frequently rebuked by his brothers joking he was sent to the Deathatch so his chapter could be free of his boasting. 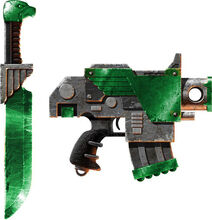 Taeyang and Dal, the twin bolt pistol and knife of Hwarang, named after the Hanjun words for 'Sun' and 'Moon'.
Add a photo to this gallery
Retrieved from "https://wh40khomebrew.fandom.com/wiki/Hwarang_Sul?oldid=123599"
Community content is available under CC-BY-SA unless otherwise noted.