The Cogger System is an Imperial system comprised of several planets, having two habitable planets that are located in-system, but the most notable are Arali and Cogger is rich with material and minerals, so this is where most of the production and raw materials for the subsector comes from.

The location of the system is in Segmentum Ultima in the Ishtar Sub-Sector. The sub-sector itself is the eastern-most fringe sub-sector with warp paths to the Wilderness Space and untamed wilds of the frontier worlds. Which they are one of the main benefactors to protect the borders of Ultima from any threats. Such as the events of the Tyranid Hive Fleets of which when the Tyranids launched a massive war against the Imperium of man. Which helped of the prevention of more Tyranids coming into the Segmentum.

It's obvious life on this planet is impossible, but the planet does hold the key to whether or not life will exist on the planets around it. This planet shields some of the other planets from an asteroid field which crosses every few decades. When this happens, small pieces are scattered through this solar system, but the vast majority are caught by this planet. Those pieces that do get scattered are usually not big enough to destroy the other planets, while at the same time potentially holding the right materials or even lifeforms to begin the process of life on those other planets. Inanis clans mine the planet during the few peaceful times of this planet.

A lifeless planet with an economy centered around gambling. Aside from a few uranium mines, gambling is the only industry on the planet, and with few resources and a poisonous atmosphere, loose gaming laws are the only reason this backwater colony exists. When a nearby inhabited planet suffered a catastrophe, the caves were sealed off from the atmosphere and converted to serve as an emergency refugee camp. Many of the survivors still live there today, having converted the caves and tunnels into a vast underground city.

Surprisingly, the underwater world of this planet has an abundance of primitive hard corals, but soft corals are extremely rare and only found in very specific regions. The hard corals are mostly nothing more than a shell with a flower-like organism growing out of it, which filters nutrients out of the ocean. But these hard corals already make for a gorgeous underwater world, despite them being all fairly similar to each other. However this world is completely Toxic to human life. Several Gargantuan liveforms live in the depths that stop most colonization efforts leaving mining to the shallows where some Inanis clans live temporarily mining in certain seasons. 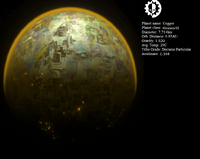 A temperate planet with a core continent and 27 hour day, Cogger residents are occasionally afflicted by powerful solar flares. A dreary planet prone to extreme weather conditions, including frequent and intense lightning storms. The planet's crust contains large quantities of metals, including nickel, copper and iron. A heavily Adeptus Mechanicus influenced world, the upper castes make trips to Mjorn as a religious pilgrimage. Early in their founding many Noble houses made deals with the Tech-priests of Mjorn. These deals greatly influence these families to this day.

Inanis is governed by bodies such as the Board and the democratically-elected Conclave, though ship captains and onboard civilian councils tend to address most issues "in-house" before it gets that far. The Conclave is overseen by the Board, five Inanis who can override the Conclave's decisions. Inanis are divided into several clans that can be spread across several ships, or restricted to one. The Inanis Complex is broken up into various clans, sometimes spread over several ships and stations. Each individual ship or station has long been retrofitted to house as large a crew as possible. Over time the Inanis thin out the vessels they can't use or are too damaged to repair, pooling the resources to buy and convert new ships and stations.

Beautiful as this planet may be, life will of course never be possible here. But in terms of research, this planet has plenty of secrets and answers ready to be discovered. If nothing else, this planet at least makes for a gorgeous sight in the night skies of the planets around it. Extreme weather conditions and violent tectonic plate movement make this planet unsuitable for any life. Although extremely violent, this planet holds many resources which could be of the utmost importance.

Found within the Cogger Star System like many other imperial systems are those of Astra Militarum regiments, within the borders of the system sits two planets and a void complex with large enough populations to annually ship out large amounts of regiments, while the other planets ship out smaller annual forces that are usually used as auxiliary forces. The major Military regiments of the sector are:

The Regiments of the system are as follows

Retrieved from "https://wh40khomebrew.fandom.com/wiki/Cogger_System?oldid=153009"
Community content is available under CC-BY-SA unless otherwise noted.