This article, Brazen Lions, was written by Achilles Prime. It may be linked to any page without asking for the author's permission.

"The betrayal by our former brothers, the wrath you feel within? That shall be our weapon of last resort! Before you learn to wield it, to kill with ferocity and abandon, you must master fighting with skill,sublety, and restraint! After all my brothers, the honed blade cuts the deepest!"

The Brazen Lions are a Loyalist Codex-divergent Space Marine Chapter created sometime between late-M35 and early-M36 during the mysterious 13th 'Dark' Founding from unknown genetic lineage. For much of the Chapter's history, the Brazen Lion have operated as a fleet-based, crusading force, though older extant records indicate that they once occupied a Chapter homeworld during their earliest years of service. Today, however, this world is a blasted waste, consumed by the wars of the Age of Apostasy. Though no trace of the culture from which the Chapter originally recruited from now exists, something of its ancient fuedal traditions was carried over and lives on in the rites and character of the Chapter. A bellicose and unforgiving Chapter by nature, the Brazen Lions have established themselves at the apex of military force, applying overwhelming force to bring about the total and immediate destruction of the enemy.

Since their inception, this Chapter has earned the respect of their fellow Adeptus Astartes and the Imperium at large, through their acts of courage, valour, battle-prowess and centuries of loyal service in the Emperor's name. However, there once was a time not long ago that the Lions' loyalty was called into question, for it is to the Chapter's eternal shame that they are successors of the formerly loyalist Astral Claws - a Chapter's whose name that is villified within the Imperium, and is synonymous with infamy and treachery. Despite the aspersions and acrimony often displayed towards them, the Brazen Lions continue to stoically carry on, determined to raise themselves above the sins of their genetic forebears.

"What are our oaths?
- The steel that binds our lives to the Emperor.
What did we swear?
- Our lives are as nought in the vision of the Emperor, save that by them we shall destroy all foes.
What is the fate of all foes?
- To perish in the fire of battle and be cleansed from the galaxy.

The Brazen Lions is a Chapter of Space Marines created during the 13th Founding, the so-called "Dark Founding" which occurred sometime between the 35th and 36th Millennium, before the start of the Age of Apostasy. While the Lions have always officially maintained they were forged from the genestock of the Ultramarines, certain defects and variations in the samples of Lions' gene-seed still held in the archives of the Adeptus Terra speak against this and the sons of Roboute Guilliman have never acknowledged any kinship, fueling suspicions as to their true heritage.

Early on, the Brazen Lions distinguished themselves from the beginning of their history, by bravely entering the conflicts of the Age of Apostasy, a tumultuous and bloody period in Imperial history that pitched the galaxy into an age of civil war and anarchy, when the Imperium was controlled by the tyrant Apostate High Lord Goge Vandire. Many Adeptus Astartes Chapters refused to take sides and get involved in the countless internecine conflicts of faith, and instead, focused on the security of the regions about their own home worlds and continued to prosecute long-standing wars against ancient and vile xenos foes. They felt to do so, was a betrayal of their sworn duties as the Emperor's avenging Angels of Death. However, the Brazen Lions had no such compunction to stay uninvolved, and wholeheartedly threw themselves into the raging conflicts of this bloody age. The Brazen Lions are one of the few beacons of light in a galaxy full of despair, as they attempted to protect the few star systems they could from the ravages of the Age of Apostasy and the carnage of Vandire's Reign of Blood.

The Brazen Lions' involvement would see their homeworld suffer for their temertiy, a fate that befell several Adeptus Astartes homeworlds such as the Fire Hawk's original homeworld of Zhoros. During the battles against Vandire's apostate forces their homeworld of Nemial was destroyed by a thermonuclear orbital bombardment unleashed by a fleet of the Ecclesiarchy's Frateris Templar.

Scattered records about the Brazen Lions imply that the Chapter has no set home world. This is uncommon for a Space Marine Chapter to operate solely as a warfleet on a perpetual Crusade. However, the Lions do not follow the standard Crusade pattern of operation when it comes to a fleet-based Chapter.

The Nomad-Predation pattern has allowed the Lions to be an entirely sovereign force that could sustain itself without any support whatsoever. Their Chapter fleet contains as many support vessels as true warships, and is said to also contain a number of voidships capable of both combat and maintenance/repairs. Because of propensity for combat, it seems unlikely that the Lions tolerate vessels in their fleet's ranks that could not hold their own on the battle line. As a Nomad-Predation fleet, the Lions voyage indefinitely, tarrying only to identify and engage the foes of man.

"We are Lions! Quietly we will endure, silently we will suffer, patiently we will wait! We are survivors, we are warriors! For he today that sheds his blood with me shall be my battle-brother eternal!"

—Chaplain of the Brazen Lions

The common form of recruitment utilised by the Lions given to their preferential mode of operation is to cull potential initiates from the young of the survivors of their assaults where practical, provided those survivors are human and free of the corrupting influence of the Warp. The young males are then forced to fight to the death to prove their worth. Those initiates who survive are then subjected to intensive hypno-conditioning and other harsh procedures designed to strip away any past loyalties.

As a crusading Chapter, the Lions maintain an organisational structure very close to that of the Codex Astartes with its standard division of ten companies, Chapter command, Apothecarion and forge armouries. The Lions also have a special affection for the use of assault tactics that make use of Jump Pack-equipped Assault Marines.

Modelled after the Senatorum Imperialis of Terra, the Den of Lions encompasses a commission of Brazen Lions Astartes of the highest rank who draw together on matters of import facing the Chapter. The group offers advice to the Brazen Lions' Chapter Master, and while ultimately it is he who holds the final sanction over all commands, he is able to draw upon the knowledge and advice of all his company captains, his senior Chaplain, Apothecary, Forge Master and Librarian.

"We do not submit to fate! We shape it!"

Being a Crusading Chapter, the Lions maintain a strong fleet and favor rapid strike missions and boarding actions, and as such they field strong additional auxiliary contingents of assault squads and Dreadnoughts in its armouries. Rapid speed and relentless attack are the cornerstones of the Lions' combat tactics.

Though the source of the Astral Claws' own gene-seed remains suppressed, the Brazen Lions themselves still speculate that its provenance ranges from either basic Ultramarines stock to that of the Dark Angels. Pointing to the supposedly un-degraded quality of Astral Claws gene-seed as well as certain factors of temperament and style of warfare. But due to the Edict of Obliteration enacted by the High Lords of Terra and carried out after the conclusion of the Badab War, all signs and evidence of the existence of the Astral Claws has been removed from official Imperial records, and therefore, any possible evidence of the Brazen Lions' possible inheritance, if they are descended from such a notorious Chapter or not.

Nobody knows exactly which Primarch's gene-seed was utilised in the creation of the Brazen Lions, as their gene-seed doesn't contain any specific genetic markers. Few fragmentary records that remain show the Brazen Lions' gene-seed branded as 'Chimeric', as it has been adulterated or somehow altered during its creation. Even with these few facts, the truth of who the Brazen Lions' genetic forebears will more than likely never be known. This matters not to the Brazen Lions, for they hold their loyalty, first and foremost, to the Master of Mankind who is the maker of all Space Marines. It is to Him, and Him alone, that the Brazen Lions hold both their faith and devotion to, for the Emperor is the master of all.

The Brazen Lions have existed as a fleet-based Chapter designed to operate solely as a warfleet on a perpetual Crusade. not follow the standard Crusade pattern of operation when it comes to a Fleet based Chapter. The Chapter functions exclusively on a much rarer operational strategy for its warfleet known as the 'Nomad-Predation' pattern. This pattern utilised by the Lions has matured over the millennia when operating beyond the Imperium's boundaries for prolonged ages of time. The Nomad-Predation pattern has allowed the Lions to be an entirely sovereign force that could sustain itself without any support whatsoever.The Lions are ever vigilant, and are always ready for battle which is why they have chosen to remain a highly mobile, fleet-based Chapter.

The Chapter fleet of the Brazen Lions is known to contain the following starships:

The Brazen Lions' Chapter badge is a large stylised black and gold coloured lion centered upon a field of sable.

The Blades of Dorn are a 12th Founding Successor Chapter descended from the Imperial Fists. In temperament, these stoic and taciturn Astartes seem aloof and standoffish. Like the Brazen Lions, the Blades are a Chapter that is often held in suspicion due to the actions of their genetic forebears. But despite such acrimony, the Blades of Dorn's personal honor to duty make them more than willing to fight to the last, holding their ground with a siege-like mentality which sees them triumph or die in the attempt. On multiple occasions, these two Chapters have shared common cause and have fought alongside one another down the millennia, decimating their foes in a hail of bolter and blade, ensuring their foes die in agony and fear.

"The Emperor commands us, our duty guides us, our honour shields us! Fear our name, for it is vengeance!"

— First Captain --- of the Brazen Lions of the 1st Pride

"Form up ranks and stand fast my brothers! We shall show these traitorous degenerates the meaning of vengeance this day!"

"Failure is not a option my brothers! Here we stand and here shall we die, unbroken and unbowed, though the very hand of death itself come for us, we will spit our defiance to the end! The lives of millions, and the honour of our Chapter, hang in the balance!"

"Many of our brothers have fallen this day. We may be few, and our enemies many. Yet so long as there remains one of us still fighting, then the galaxy shall yet know hope." 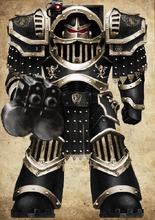 Champion of the elite 1st Pride of the Brazen Lions 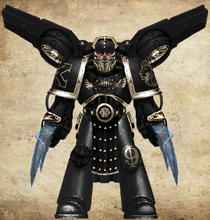 A Land Raider of the Brazen Lions 3rd Pride
Add a photo to this gallery
Retrieved from "https://wh40khomebrew.fandom.com/wiki/Brazen_Lions?oldid=138291"
Community content is available under CC-BY-SA unless otherwise noted.