This article, Blood Jaws, was written by Blood Jaws Megalodon. It may be linked to any page without asking for the author's permission.

None, though they do accept help occasionally from other Warbands.

888+ (Approximately 70,000+ Chaos Cultists, Heretics and other servants of the Ruinous Powers)

Unknown if they possess one.

The Blood Jaws, also known as the 'Sanguine Dentas', are a formerly Loyalist Chapter of Space Marines created during an Unknown Founding in 013.M37, supposedly from the lineage of the savage and merciless Charcharadons Astra, whom themselves, supposedly descend from the lineage of the Raven Guard Primarch Corvus Corax. This bellicose and ferocious Chapter was created in order to stand as a bulwark against constant attacks in and around the Eye of Terror, from both the Forces of Chaos and various xenos threats. Unfortunately, within the first century of their creation the Chapter fell from the light of the Emperor, for unknown to them, their first Chapter Master had been corrupted by a Greater Daemon of Khorne. Following their ill-fated sojourn into the Eye of Terror, the Blood Jaws were slowly corrupted by the insidious touch of the Blood God. When they finally emerged, they had been transformed into a large Chaos Warband, wholly dedicated to slaughter and murder. Now they commit the most obscene levels of carnage wherever they go, in tribute to their brutal and bloody deity.

The Blood Jaw Space Marine Chapter were created in the early years of the 37th Millennium to combat the various Chaos and xenos threats in and around the Eye of Terror, following an incident in which nearly eight Imperial worlds near the Eye were taken by an unknown xenos race. To combat this threat, the High Lords of Terra sanctioned the use of the gene-seed of the ferocious Charcharadons to be used to create a new Chapter, whos purpose would be much like many other Chapters stationed around the Eye. Though the Blood Jaws' mission was to provide a stalwart defence of Imperial worlds, they chose to take a more proactive role to seek out the various threats of the Forces of Chaos and xenos that existed in and around the Eye.

This was a role the Blood Jaws Chapter performed admirably, as they brutally slaughtered any and all foes who dared to assail Imperial worlds under their protection. The Chapter excelled in their role as bloody-handed retributors for nearly a century, though this all changed when their Chapter Master, Ukkaja Elkram, came into contact with a daemonic artefact - a flaming powersword that was possessed by a Bloodletter of Khorne, named Arguando'thrua. The daemon took hold of the Chapter Master and possessed him - mind, body and soul - bending the Chapter Master's very soul to his will. Eventually, Arguando'thrua began corrupting other members of the Chapter, eventually amassing enough followers of the Blood God to kill the few remaining loyalists and remaking their Chapter into a true Chaos Warband.

It appears that, through the influence of the Greater Daemon, the Chapter Master had foresight as well. Ukkaja Elkram made a devil's bargain with the infamous, former fallen Emperor's Children Chief Apothecary, Fabius Bile. If they could provide him the resources and test subjects he desired for gruesome experiments, he would repair and enhance the Blood Jaws' gene-seed.

Now the Blood Jaws roam the Eye of Terror as a marauding force - killing xenos, taking skulls and enslaving humans for Fabius Bile and his vile experiments, all in the name of the Blood God.

As the Blood Jaws are a fleet-based Warband they do no possess a home world of their own, therefore they are not tied down to a demesne and may continue in their twisted Crusade in and around the Eye of Terror.

Ruled by a single Astartes who's word is law amongst the Blood Jaws, he is called the Megalodon, their leader is chosen in a bloody trial by combat. He must defeat the current Megalodon in unarmed combat, so as to provide equal footing. This single Astartes is said to be a sight to behold. The Megalodon by tradition wears what appears to be an ancient set of Heresy Era Emperor's Children Cataphractii pattern Terminator Armour, presumably given by Fabius Bile as payment for providing numerous test subjects. He is described as a living incarnation of a daemon upon the battlefield - destroying swathes of innocents, soldiers, and even his own Astartes - with a flaming unidentified power sword which is possibly daemonic in nature.

The Blood Jaws sole mission was, and is, still believed to eradicate the Chaos-corrupted heretics and xenos populations around the Eye, as they continue to quest on a near, never-ending eternal Crusade, which has now become a dark and twisted Blood Crusade. The Blood Jaws have also liberated several human worlds formerly under the control of a now unknown and extinct xenos race's occupation, but arguably, the men upon these world's might have been better off under the xenos' rule.

Whereas their forefathers practice violent sacking and pillaging of worlds for new recruits for their own Crusade, the Blood Jaws take near everything including survivors, likening it to a predator's eternal hunger.

The Blood Jaws are given the opportunity to recruit any of those taken during the Gathering if they are not chosen by Fabius. If they are chosen, they are implanted with their corrupted gene-seed and made to live and survive amongst the daemon and mutant-infested parts of their flagship. To survive, they must find a way to break out of the labyrinthine bowels of the massive vessel and get themselves to the "safety" of the Astartes-controlled area of the ship. This often results in a low rate of recruitment, with often only maybe 3 or 4 surviving the grueling trial out of 80 or so potential Aspirants that are sent in. Those that do survive, possess a predator's cunning and lust for savagery, that overshadows a constant urge to commit violence and carnage.

The Chapter's 2nd and 6th Companies are all that remained from the culling the first Megalodon preformed, though they have now swelled up to large sizes due to the sheer amount of recruits they can be given.

Often times the Blood Jaws will stay put in orbit for several weeks and examine a planet's weakspot, using the Hexanchi Chosen, sensors and pict images of the surface, and even sometimes with probing assault, before preforming an asteroid bombardment of the largest centers of government. In the ensuing chaos they make planetfall and proceed to take as many people and other resources as possible, though many are slaughtered in the name of the Blood God.

In ground combat they first send in the Saharduin to exhaust the opponent, before dropping down in drop pods. After dropping down, they immediately set themselves to terrorising the populace in raids, assaults, and sacking.

Though the Blood Jaws are worshippers of Khorne, they seem to only pray for strength and power during their wars and during the Gathering.

This formerly loyalist Space Marine Chapter primarily wore ebon colour battle-plate with deep red painted on top of the helm, shoulder pauldron insets, parts of the plastron (chest guard), gauntlets and sabatons (boot armour). They eschewed the used of Codex-proscribed squad specialist iconography and numerals for easy identification of a battle-brother's assigned squad specialty, number and company designation. They were known for adorning their armour with an assortment of spikes and chains, which granted them a savage and primitivistic appearance as well as being highly effective at causing additional damage to their foes in close combat. Many battle-brothers also adorned their armour with primitive fetishes of shark-teeth necklaces and the several heads of their victims, further adding to their already savage appearance.

Following their fall to the Dark Gods, the Blood Jaws continue to wear battle-plate painted in darkest black with rust red on parts of their armour, with bronze trim and embellishments. However, they wear savage looking adornments of both the flayed skin of their victims as well as skulls, taken as trophies from worthy opponents. They also are known to wear a variety of Chaos fetishes and symbols to indicate their allegiance to the Ruinous Powers.

The Blood Jaws warband icon is a large set of stylised jaws of a massive shark, yawning wide to devour its victims whole, in front of a large black coloured Chaos Octed symbol (the eight-pointed Star of Chaos), which indicates their allegiance to the Ruinous Powers, centered upon a field of rust red, the colour of spilled blood.

It seems even though they are a pragmatic Warband, they do not seem to hold any other Astartes Warbands as "allies" in any way shape or form, unless dictated by Fabius. Though they do seem accept help from most any Chaos Warband if they are not pledged to Tzeentch.

By The Blood Jaws

"For our time is now. Let the ways of the Imperium be forgotten from our minds. For now, we make the xenos cower and die like it deserves with the power of the Blood God."

"Your gene-seed will be ours!"

About The Blood Jaws

*A voice like a traumatized war victim comes up, masculine*


"They came in ships of black, black as the ships that came to take witches and warlocks away, the [REDACTED]s own squid-like craft nothing against them."


"We thought them saviors, here to finally end our oppression and moreso end the [REDACTED]s iron rule of our world….we were wrong…"


*The voice of a young woman comes up, though beautiful, it holds only venom in it's tone*


"When they stepped out, all hope of was lost...they were clad in red and black armour, horns and sigils which made eyes bleed adorned them….The horrifying was what came with them…"


"Monsters….red monsters like hounds with the gilled heads of some kind of great fish, and what seemed to be walking engines of destruction made of flesh and metal…"


*A sound of something hard hitting flesh*


“Agh!.....these things, these Astartes imposters….they tore into the crowds with chain weapons, great claws, and some with malformed maws upon their helmet grills like the snapping fish hounds...then they….they….no Belsandre…."


*Another hit, only louder*


"Do not make me ask again heretic!"


"They started taking the children…. they slaughtered infants in their mother's arms, adolescents and adults, but let others live after.. examining them like cattle!...they took the girls and the boys, and then…..us…."


"Now...we are getting somewhere….what did they do?"


"They started herding many of us onto the large, horrible ships….I only later realized what they wanted...I had assumed they wanted slaves or even….. cattle…"


"But….they forced us into cages, and another Astartes came into the chamber. He was draped in a coat made entirely of human skin, and had silver hair with many technological instruments coming from his purple armor. And he only spoke one word to us…" 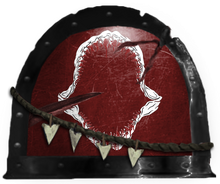 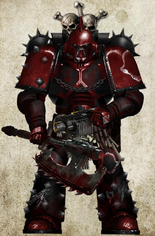 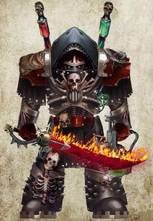 The Megalodon (warband leader) of the Blood Jaws Warband.
Add a photo to this gallery
Retrieved from "https://wh40khomebrew.fandom.com/wiki/Blood_Jaws?oldid=60450"
Community content is available under CC-BY-SA unless otherwise noted.