This article, Aurmenath-Pietus, was written by Thebladeofgold. It may be linked to any page without asking for the author's permission.

With a rather unique history, the Necron Tombworld of Aurmenath-Pietus is a fallen forge world in the Western reaches of the Aurum Sector. Led by the radically liberal Necron Lord Menaroth who believes that humans should be accepted as equals, and Archmagos Kaleumask Prime. Aurmenath-Pietus functions both as the center of a small human empire, but also as the crown world of a minor Necron Dynasty.

Rise of the Necrons

During the early days of M41, as the Necrons began to awake across the galaxy, Techpriests from the Forgeworld of Pietus made contact with what they believed to be archaeotech constructs, in actuality, these were Necrons of the Aurmenath dynasty. What made this encounter unique from the countless others of this type going on around the same time, was that the overlord of the Auremanth dynasty, Menaronth the Peacemaker, after investigating the nearby areas of the galaxy using hidden scouts, believed that humanity was the rightful successor to the Necron's galaxy and that his destiny was to aid them down this path.

Aurmenath-Pietus is largely covered in radioactive seas, with rocky continents dominated by badlands. Production centres are mostly based in environmentally sealed hive cities or near Blackstone deposits. The main tomb complex opens on the northernmost continent.

As Aurmenath-Pietus is not required to give products over to the imperial war machine, they largely focus on defending their small empire, and as such, allied planets can expect to receive advanced technology using Necron technology adapted for human use.

Aurmenath-Pietus has a large military force with both human and Necron aspects. due to the isolationist practices of this Forgeworld, most of these forces are invested in planetary defense:

Fell free to add you own

"These xenos-loving traitors seek their doom"

— Captian Etbeus Deathbringer of 2nd Company, as Skitarii charged the Imperial positions during the Battle of Nuremant Fields

Necron Warrior of the Aurmenath Dynasty 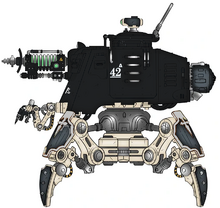 Onager Dunecrawler of Aurmenath-Pietus
Add a photo to this gallery
Retrieved from "https://wh40khomebrew.fandom.com/wiki/Aurmenath-Pietus?oldid=126879"
Community content is available under CC-BY-SA unless otherwise noted.