Antaeus is the current Chapter Champion of the Nemean Lions Space Marine Chapter.

Antaeus was a late recruit to the Astartes, initially rejected due to perceived poor suitability. He joined the Nemean PDF Cadets and swiftly gained a reputation, displaying impressive skill with any close combat weapon, particularly the traditional hunting spear and the long sword. He took his rejection strongly and fought hard to be recognised by both the Astartes and his superiors. Eventually he came to the attention of the Regulus, who insisted he be initiated despite the reservations of the Sangomas. He was several years too old now but the Nemean Sangomas managed to implant the Gene Seed successfully. They did warn Antaeus though that he would likely suffer from degeneration in later life and a shorter life span. Such warnings did not concern the young and brash Initiate. For the next two centuries later he fought his way up to the rank of Eparchos (Lieutenant) and was a well respected warrior in the Chapter, recognised for his skills in combat.

With the death of the previous champion, Regulus Alkaios announced the traditional ritual contest to select the replacement. Antaeus faced 20 contenders in unarmoured single combat, defeating each one in turn without taking a scratch in return. As the winner Antaeus was chosen by Alkaios, who was secretly pleased that the young warrior had achieved so much.

As Chapter Champion Antaeus wears a relic suit of Mk II power armour, one of the Chapter's most sacred possessions. He also wields an ancient blade which bears a passing resemblance to the Black Sword of the Black Templars. Since his prowess is made clear, he does not feel the need to signal it further through pelts, choosing instead to only wear a piece of the Apex Leonis pelt which was gifted to him by Alkaios upon his ascension to the position.

Antaeus has recently crossed the Rubicon Primaris at the request of Alkaios, an event which nearly cost the warrior his life. Due to the predicted flaws in his physiology thanks to late implantation, the new organs were very nearly rejected and his Belisarian Furnace did not initially revive him. With his Chapter already divided over the issue of Primaris, Alkaios knew that he could not have another hero of the Chapter lost this way. Iphaclus and Aclepius worked quickly, the Sangoma stabilising the troublesome organs while the Spiritwalker used his Psychic abilities to keep Antaeus' spirit from slipping away. They saved him, barely. Antaeus would take many weeks to recover and his friends feared that he had been robbed of his former skills. As his strength returned, Antaeus put himself through a rigorous training regime, swearing his sparring partners to secrecy. He need not have worried though, such was the respect they held for him, none would have revealed his weakened state to the rest of the Chapter. In recent years Antaeus has resumed his position as champion, proving himslef once more to be the first blade of Caelus.

Antaeus is outspoken and aggressive in his personality, having learned early on that he must fight for recognition and respect. Through his numerous trials he has earned the right to give his opinions freely, something Alkaios has learnt to tolerate. However his temperament in battle is relaxed, even in the heart of a swirling melee he remains an oasis of calm. As well as being a physical champion Anteaus is a learned man and hungry for knowledge, if not sparing with his students he is seen in the library, excusing himself from the hunting parties organised by his brothers.

Antaeus possesses the dark skin, black hair, and brown eyes that are typical to the people of Caelus Prime. Like all of the warriors of Caelus, he bears ritual tattoos on his face and body that display his status and history. A side effect of his brush with death is a streak of grey hair along his right temple. Due to the fact that the only other Nemean to have this feature is Shaka, some has begun to whisper that Antaeus must have been similarly touched by the spirits. 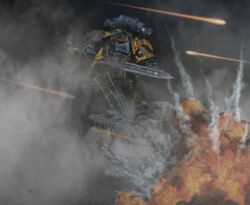 Antaeus advancing to engage an Ork Warboss during the Battle of [REDACTED].
Add a photo to this gallery
Retrieved from "https://wh40khomebrew.fandom.com/wiki/Antaeus?oldid=140267"
Community content is available under CC-BY-SA unless otherwise noted.