Armorial of the Seraphim of the Abyss.

Lieutenant (Sub-Commander of a Company)

Seraphim of the Abyss

Anris Balthiel is a notable Knight Marshal (Lieutenant equivalent) and famous figure of the Seraphim of the Abyss Space Marine Chapter.

Knight-Marshal Anris Balthiel is a decorated and unwillingly famous figure known throughout the Scarus Sector of Segmentum Obscurus, Anris Balthiel was elevated to the rank of Force Commander in late Millennium Forty One for his daring and unrelenting skills shown through his service in the 4th Company. Anris Balthiel was heralded as a champion of the Seraphim for his execution of a dire war fought on the fringes of the Sector's borders, upon the world of Stolla Secundus. A number of the Fallen Angels had joined ranks with the terrible and incredibly deadly Slaaneshi Warband known as the Forsworn, and the closest of the Seraphim of the Abyss' number to the situation was Anris' force of Space Marines, and a few Predator Tanks seconded by the 3rd Company. Joining forces with a battered Imperial Guard regiment, the Seraphim eventually came to add more names of Fallen to repent to their records, and skulls of the traitorous angels were given to the heroes of the campaign. 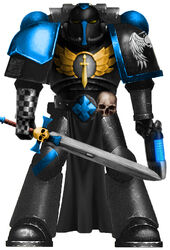 Anris Balthiel, wearing staple artificer armor reminiscent of the ancient I Legion and the skull of the Fallen Angel Arioch.
Add a photo to this gallery
Retrieved from "https://wh40khomebrew.fandom.com/wiki/Anris_Balthiel?oldid=88033"
Community content is available under CC-BY-SA unless otherwise noted.