Regulus Alkaios is the current Chapter Master of the Nemean Lions.

The current Chapter Master of the Nemean Lions, ascending to the position in 652.M41. Alkaios was already a legendary figure within the Chapter, having defeated an Apex Nemean Leonis single-handedly during a hunt and scored many victories as Hekaton of the 2nd Speria. During his youth Alkaios fought extensively alongside a detachment of Salamanders and gained a deep respect for the regard they showed towards the innocent civilians of the Imperium. Alkaios will do his utmost to protect the mortal humans of the worlds he fights on, though he will not allow this to compromise his battle plans or put his brothers at risk. This has gained him a great deal of adulation amongst the peoples he has saved. Alkaios can often be seen at the forefront of battle, scattering and crushing his foes with mighty sweeps of his thunder hammer, the Hammer of Hephaestus. Alkaios has recently successfully crossed the Rubicon Primaris as an example to his men that the procedure is feasible.

Alkaios retains the youthful vigour and fearlessness that marked him out early for greatness, seemingly untempered by the many trials and torments that he and the Chapter he now commands have gone through. Alkaios is an innovator, something that has sometimes put him at odds with the more conservative elements of his Chapter. Since taking command, he has overhauled the organisation of the Nemean Lions to bring it more inline with his interpretation of the Codex Astartes and pushed to adopt wargear and equipment that can better suit the tactics of his warriors. Alkaios was quick to see the importance of the Primaris and to push for their adoption, risking death to cross the Rubicon Primaris to show his warriors that this was the way of the future.

Alkaios possesses the dark skin, black hair, and brown eyes that are typical to the people of Caelus Prime. Like all of the warriors of Caelus, he bears ritual tattoos on his face and body that display his status and history. Alkaios dislikes the baroque armour of his predecessors and when overseeing the construction of his Mk X armour he made sure that it was kept comparatively plain and unadorned. 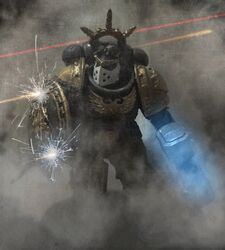 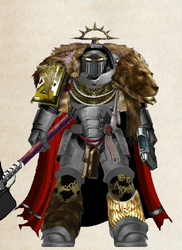 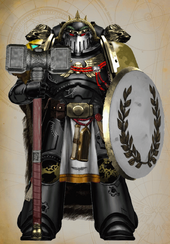 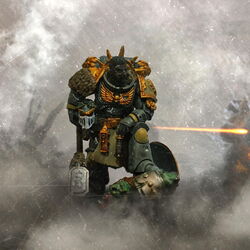 Add a photo to this gallery
Retrieved from "https://wh40khomebrew.fandom.com/wiki/Alkaios?oldid=139184"
Community content is available under CC-BY-SA unless otherwise noted.