A young but already highly decorated Astartes who fought alongside Roboute Guilliman during the Indomitus Crusade. The first Primaris to be accepted by the Chapter, Alexiares was responsible for passing on the knowledge he had gained to the other Greyshields adopted by the Chapter. He was gifted a relic blade by the Ultramarines as thanks for his aid in the War of Beasts. His skill at arms and cunning intellect has seen Alkaios recently promote him to the First Speria.

Alexiares is a calm and collected Astartes, displaying a deep patience and quiet manner. Despite not hailing from Caelus, he has shown deep respect for the Chapter's beliefs and adheres to their tenents. As is typical of the Nemeans, he will seek to ensure that the innocent are protected from harm during a battle, as long as it does not put the mission or the lives of his brothers at risk. He displays an extreme amount of disdain and hatred for the followers of Chaos and any other traitors to the Imperium, seeking to purge them as quickly and efficiently as possible.

As a non native, Alexiares is pale skinned compared to his Nemean brothers, with light brown hair and green eyes. As a Primaris Astartes he stands slightly taller than the average Nemean Astartes at eight feet tall.

About: (Feel Free To Add Your Own) 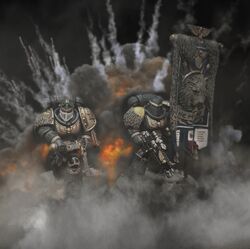 Eparchos Alexiares defends the First Speria Ancient during the War of the Beasts.
Add a photo to this gallery
Retrieved from "https://wh40khomebrew.fandom.com/wiki/Alexiares?oldid=140110"
Community content is available under CC-BY-SA unless otherwise noted.